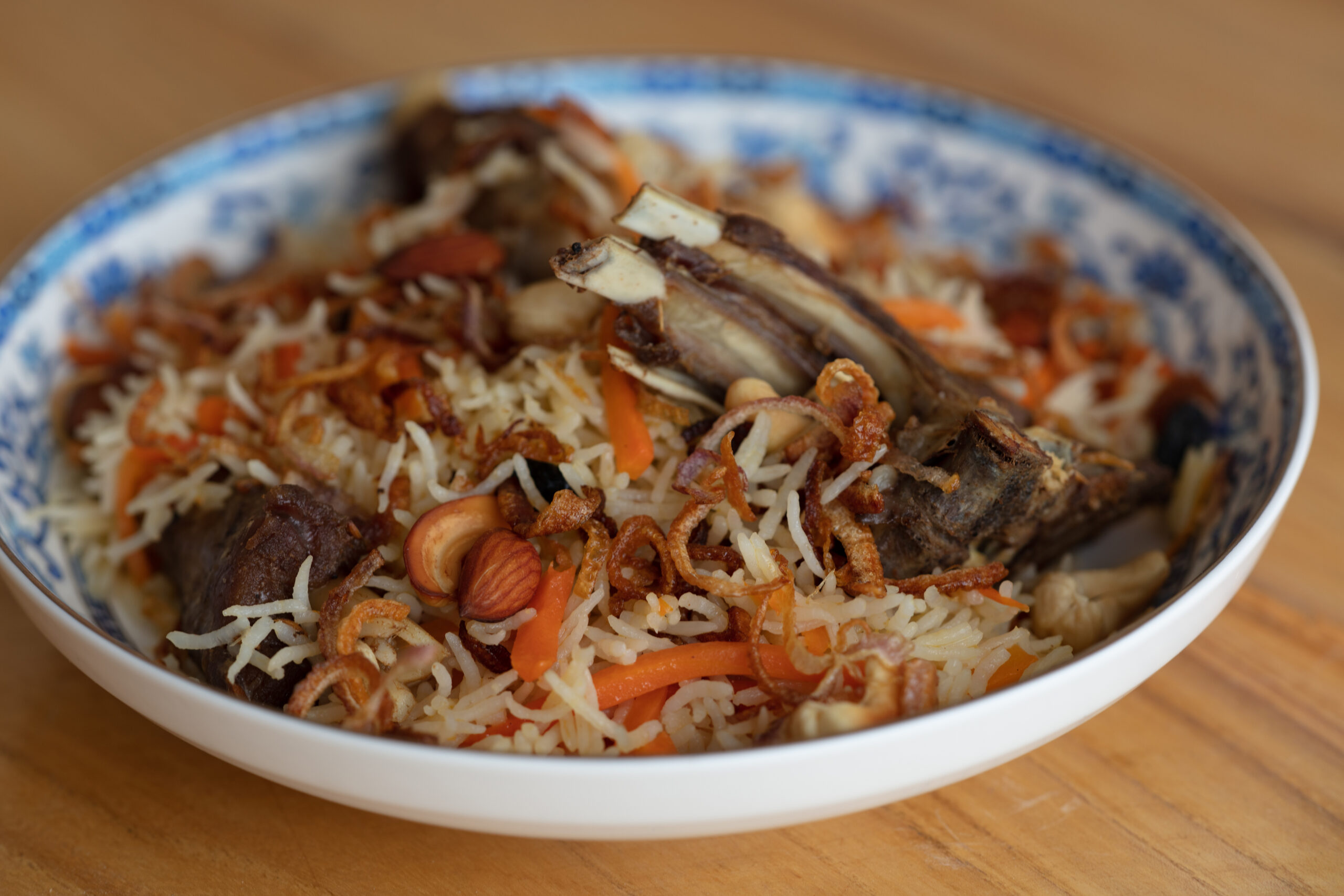 5 portions
Main Course
Ladakhi
Intermediate
I’ve picked Yarkhandi Pulao as my first recipe contribution to The Locavore because it uses commonly available ingredients, and hence can be replicated in different parts of India. Being rice-based, the dish is easier to cook than most other Ladakhi dishes which require either roasted barley flour, or handmade wheat dumplings and noodles. For me personally, the Yarkhandi Pulao is a true representation of the historicity of my land on a plate—taking into account my family’s connections with foreign lands and cultures—which makes the documentation and representation of this dish all the more special.

Contrary to popular belief—a rather myopic one—Ladakhi cuisine is a lot more than just momos and thukpas. Yarkhandi Pulao is, in fact, a dish that reflects the region’s ties with Central Asia. It has travelled south to Ladakh from Yarkhand (part of present-day Xinjiang province in China) along the southern tributaries of the ancient Silk Road. This recipe was recounted by my aunt (in-law) Smt. Tsering Angmo Shey Lonpo— an accomplished cook—based on her childhood memories and experiences of cooking with Yarkhandi traders (along with inputs from my nonagenarian maternal grandmother). In old Leh, there were only a couple of families who hosted the Yarkhandi traders, one of them being Kalon, my husband’s family, and another being Shrangara, my maternal grandmother’s family.

Traditionally cooked with big chunks of goat meat, always on the bone from the leg and rib-joints (raan and cham) of the animal, Yarkhandi Pulao was the Ladakhi haute cuisine of yore. This was because in a high-altitude cold desert where the diet reflected the crops that the earth could sustain, the rich pulao was made with rice, an extremely premium grain until about 70 to 80 years ago (till the Public Distribution System was introduced in the region), with meat, fat (clarified butter), and nuts being the other ‘rich’ ingredients.

Unlike most pulaos and biryanis in the Indian subcontinent, the Yarkhandi Pulao differs in the fact that shah zeera is the only spice used to flavour the rice. This lends a subtle yet refined aroma to the rice without the overpowering taste of spices in every bite. The use of nuts as garnish draws similarities with other central-Asian pulaos, but the Yarkhandi traders in Ladakh mainly used almonds, sweet apricot kernels, and small black raisins.

For Cooking the Meat

What You Will Need

Tools you will need include basic household utensils and pots.

Wash the rice a few times in cold water and let it drain in a strainer or colander for at least an hour so it is completely dry.

Prepare the garnish ahead of time. Heat 2 cups of refined vegetable oil on medium to high heat. Once the oil is heated, add half of the sliced onions and deep fry on medium-low heat. Stir the frying onions in between to ensure they brown evenly. Once they turn golden-brown, remove the fried onions from the hot oil immediately onto a clean, dry plate lined with a paper towel. Repeat this step with the leftover onion slivers until all the onions are fried. Once done, keep the fried onions (beresta) aside.

Wash the almonds and sweet apricot kernels to remove any dust, and pat dry. Add 1 teaspoon of ghee in a pan, and add the nuts to fry/toast on medium-low heat. Stir continuously so it is fried evenly for 2-3 minutes, and remove when done.

Begin by cooking the meat. In a pan, bring 8 cups of water to a boil, and add the pieces of meat along with 1 teaspoon of salt, 2 black cardamoms, 1 tablespoon of whole fennel seeds, and ¼ of a medium-large onion. Cover the pan with a lid, and let the mutton broth cook and simmer on medium heat for around 1 hour and 45 minutes. Skim any impurities/scum that rises to the top.

Keep checking the water in the broth at regular intervals. If the broth reduces considerably below the surface of the mutton pieces, which is expected after an hour of simmering, add 4-6 cups of hot water so that the big pieces of meat are fully submerged in the broth again.

Let the meat continue cooking on medium-low heat till tender and fully cooked, but not falling off the bone; and the broth is reduced to almost half, about 3-4 cups. Remember to add more water during the simmering process as and when needed.

Once cooked, remove the mutton pieces from the broth onto a clean plate with a slotted spoon, and sieve the broth through a strainer. You should ideally have about 3-4 cups of flavourful, mutton broth. Keep the broth aside.

In a wok, heat 6 to 8 teaspoons of ghee. Once hot, add a few of the boiled pieces of mutton and shallow fry on medium heat while turning the pieces so that all sides of the meat are browned and fried evenly. Cover the wok partly while frying to avoid hot oil from splattering on your hands. Once this is done, remove the properly browned pieces with a slotted spoon. Repeat this step until all the pieces of meat are fried, and then keep them aside.

To make the pulao, take a deep, thick-bottomed pot, and heat 3 to 4 teaspoons of ghee in it. You can also use the leftover ghee from frying the mutton pieces.

Add the 2 ½ cups of julienned carrots and sautee on medium heat, stirring at regular intervals so the carrots are evenly cooked.

Once the carrots are well cooked (they will be noticeably reduced to almost 1/3 the quantity), add 3 ½ cups of the strained mutton broth. If the quantity of the broth is less than 3 ½ cups, add hot water to substitute the remaining portion.

Once the broth starts simmering, add the 2 cups of the washed, drained rice, 1 teaspoon shah zeera, the fried pieces of mutton, 1 tablespoon of onion beresta, and salt to taste.

Stir this mixture, cover with a lid, and let the Yarkhandi Pulao cook on medium heat till the water is almost absorbed, but the rice is noticeably wet like a gruel (that is for the first 5-8 minutes). Now seal the lid with some wet dough, or a heavy weight, and let the pulao cook on very low heat for 10-15 minutes. Once the pulao is done, remove from the stove top, and let the dish sit undisturbed for 15-20 minutes.

Carefully open the lid, removing the sealing dough (if used), and fluff up the Yarkhandi Pulao using a fork or chopsticks while adding some of the fried onions, fried nuts, and the black raisins. The rice grains should be cooked just right, and not mushy with each of the grains separated from each other. Plate and serve layered with the remaining fried onion slivers, nuts and raisins.

The following recipe has been cooked and documented in Jammu, which is at 1070 feet above sea level. For regions at sea level, the cooking time might be less, and the amount of water required for cooking may vary relatively. For regions at higher altitudes, the cooking time will increase with height, and the relative reduction in atmospheric pressure. For those cooking at above 8000 to 9000 feet, the use of a pressure cooker would be more time-efficient. To give context, at home in Leh, at 11500+ feet above sea level, mutton takes a minimum of 45 minutes (counting from the time the lid is sealed) to cook in a pressure cooker in contrast to the 15 to 20 minutes required in Jammu.

Traditionally, the Yarkhandi Pulao was cooked in traditional heavy stone pots called doltok in Ladakhi. The substantial weight of the stone lids of these pots did not necessitate the use of wet dough for sealing when cooking the pulao.

While frying the meat, use a lid to partially cover the pan to keep hot splattering oil away from your face and hands.

In old Ladakh, the pulao was also cooked in homemade butter called khag-la in Ladakhi. Owing to the cold climate, homemade butter kept well without turning rancid, and could be carried easily as it stayed solid. I have used ghee which is common too as it smells and tastes milder than the local butter, which sometimes has a bit of a tang to it.

Instead of cooking the carrots in the pan, they can be deep fried in refined oil which is how it is done traditionally. But in doing so, the carrots lose their flavour in the hot oil, instead of contributing them to the pulao.

With vegetarianism on the rise, omitting the meat entirely from the recipe is also an option. In such a scenario, substitute the meat stock with plain water for cooking the pulao.

Kunzes Angmo is a food history enthusiast on a mission to honour, document, and celebrate her native Ladakhi cuisine. Her bespoke Artisanal Alchemy Ladakhi Lunch Experience curated at the Jade House in Leh and the Stok Palace in Stok is one such medium through which she promotes the food culture of her ancestors.

She is the founder of Ladags Earth Agro Foods, an artisanal food processing startup that manufactures and markets small batch, limited-release products such as apricot conserve made from pesticide-free, farmed and foraged produce native to the trans-himalayas.

You must be logged in to rate this recipe.